Bioart, roughly defined as the practice in which artists use biotechnology to create their work, provides a fascinating bridge between the two cultures of art and science (Pasko). With technologies allowing us to easily modify and control living organisms becoming more accessible, bioart provides provocative and stimulating pieces that raise important questions into the role bioengineering has in society and its foundational ethical principles.

Edurado Kac, a Brazilian-American artist who coined the phrase ‘bioart’, is famously remembered for his project GFP Bunny. On April 29th, 2000, Kac first held Alba in his arms. Alba was a genetically modified fluorescent rabbit produced by Kac in collaboration with French geneticist Louis-Marie Houbdebine. The rabbit was modified through the zygote microinjection of the GFP gene found in jellyfish that fluoresces green when exposed to blue light. Following Kac’s public sharing of his project, he was castigated by animal rights groups and members of the global media for his work.

More recently, stem cell research has advanced to a point where human organs can now be cultured and grown. Amy Karle, a bioartist and one of the “Most Influential Women in 3D Printing” (All3DP), 3D printed a scaffold in the shape of a human hand within a biodegradable pegda hydrogel in the hopes that Mesenchymal human stem cells seeded onto the design would eventually grow into tissue and mineralize into bone along the scaffold. Although her project, Regenerative Reliquary, pushes the boundaries of modern stem cell research, it also raises some crucial ethical and philosophical questions about the use of stem cells. Is it acceptable to swap our organs with designer organs? Should we be required to have regular organ replacements to elongate our lives? Should we be allowed to have more than four limbs? 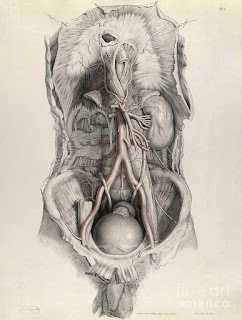