Medicine and art have long been connected through their concerted efforts to anatomize and document the human body. Hallmark publications containing exquisite illustrations of the human anatomy include Andreas Vesalius’s De Humani Corporis Libri Septum, as well as Henry Gray’s famous Gray’s Anatomy textbook that was first published in 1858. However, recent developments in technology, specifically medical technology, has shifted the role art plays in medicine. With imaging technologies such as X-Ray, MRI and CAT scans allowing for more detailed reconstructions of the human body through less invasive methods, artists are no longer needed for illustration purposes. Instead, the artists role has shifted into a space that involves innovation, engineering and critique.

One area in which art has an important influence in modern medical technology is prosthesis. This includes plastic surgery, limb prostheses and the more recent bio-hacking. French artist ORLAN is a notable example of an artist who has used plastic surgery in her work. From 1990 to 1995, she underwent nine plastic surgery operations to alter her appearance in very particular manners. For example, one of her operations altered her forehead to mimic Leonardo Da Vinci’s Mona Lisa, whilst another surgery altered her chin to appear as that of Sandro Botticelli’s Venus. Her “Carnal Art” gives critique to both contemporary society’s infatuation with body image and to how medical technology is being used to alter our bodies for aesthetics.

Aside from artificial enhancements to the body, 21st century developments into stem cells have also led some artists to create use organic material in their work. Amy Karle is a bio-artist who has dedicated much of her work to using medical technology to enhance the human body. In her Regenerative Reliquary project, she 3-D prints the design of a hand using stem cells that grow into bone cells. In doing so, she raises some very important questions regarding growing human material outside of a human and the possibility of enhancing the human body organically and not just artificially.

Overall, medical technologies have enabled artists to create extraordinary works that have not only transformed the medical community itself but have also allowed some very important ethical and moral questions to be raised. From this, we can more clearly see the importance of the artist’s position in science and technology: the artist lays at the forefront of experimentalism, thus pioneering questions that query the foundations of human morality. 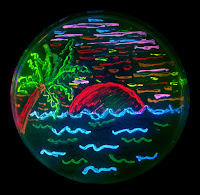